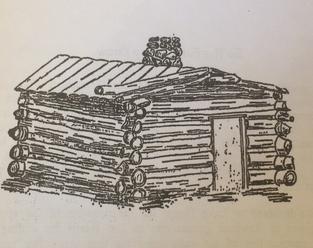 The exploration and settlement of the frontier west encompassed many historical facets While men dominated the demographics, women played diverse and welcome parts in their lives. One of the most colorful was Ma'am Shephard, better known as Mother Feather Legs because she wore red pantalets that fluttered in the wind as she road horseback across the prairie. An observant cowboy said "She looked like a feather-legged chicken in a high wind."

Feather Legs operated a roadhouse in her dugout/cabin on Rawhide Creek in eastern Wyoming along the Cheyenne-Deadwood Stagecoach Line. She provided whiskey, comfort and personal services to the stagecoach passengers, cowboys and other travelers to the Black Hills gold fields beginning in 1876.

She and her sons, Tom and Bill, were marauders in the4 Tensas swamps of Louisiana during the Civil War. When the soldiers returned home they captured and hung her songs. She escaped to Wyoming to establish her enterprise which included hiding the gold and money she held for some of the stagecoach bandits.

Another Tensas swamp renegade, "Dangerous" Dick Davis, "The Terrapin," reunited with Featherlegs in 1879. After spending a few months with her, he discovered where she had hidden her stash, shot her and took her $1500 cache back to Louisiana where he to was caught and hung.

To confirm the Featherlegs legend, Russell Thorp, son of the Cheyenne-Black Hills Stage Line owner, dug her up in 1893 and found her story true including a casket full of red hair. Mr. Thorp also confirmed the legend and grave site in 1964.

Newspaper publisher, Jim Griffith, and cattle rancher, Bob Darrow, erected and dedicated a two ton Rawhide Buttes granite monument to Featherlegs on May 16, 1964. It has been recognized as the only monument in the United States dedicated to a madam/prostitute.

Although the site is 10 miles on a dirt road from the nearest town,

One-half of the cost of the monument for Feather Legs, the

first madam north of Ft. Laramie, was contributed by the last

madam in that area.

While Feather Legs Monument is located on most national road

States at Denver International Airport, there has been no

historic recognition by an organization with the stature of the